Hey there guys….I hope your all reading my Starbucks post’s and enjoying them. Sometimes I wonder if this is even helping any other collector’s like myself. So please leave some comment’s if any of my post’s have been helpful in your searches. I’d love here about your finds and thoughts

So today I’ll focus on 2003. There were a lot released. 7 SKU’s in all. I think you’ll be impressed with this collection.

In 2003 Starbucks released the 2nd style of Abbey mugs. This is a white ceramic mug with a steaming red mug. The white on the mug also has iridescent snowflakes around it and a candy cane stripe handle. Hung with red satin cord. The bottom is stamped 2003

The packaging was sealed shut and was not reusable 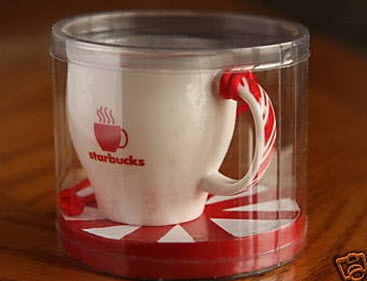 Starbucks offered the 2nd edition Abbey mug in 2 ornament this year. This one is plain red ceramic with a steaming white mug. They did not do the snowflakes or the reverse candy cane handle. Both are unique in their own style this year and I love that. The bottom is stamped 2003

This packaging was also sealed shut and was not reusable 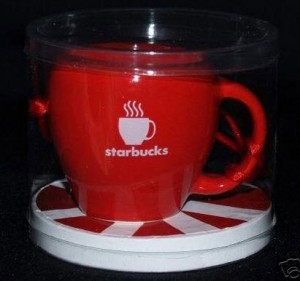 Starbucks went a step further and released a white ceramic pleated mug with siren logo. Also hung with a red cord hanger. The bottom is stamped 2003. This is the only year they released a pleated mug which was the same as in store mugs this year as well

This packaging is the same as the last, and not reusable

This is exactly the same as the 2002, but the packaging, cord and date stamp are different. The packaging has the same bottom container as all the others released in 03′. It also was given the same sateen red cord hanger instead of the 2002 red flat satin ribbon. The bottom is marked with 2003 instead of 2002.  I added a side by side of the packaging photo as well for comparison

This also looks exactly the same as the 2002, except the packaging, cord and date stamp are different. The red mug also has the same packaging, bottom container and sateen red cord hanger instead of the 02′ red flat satin ribbon. The bottom on this years also marked with 2003. 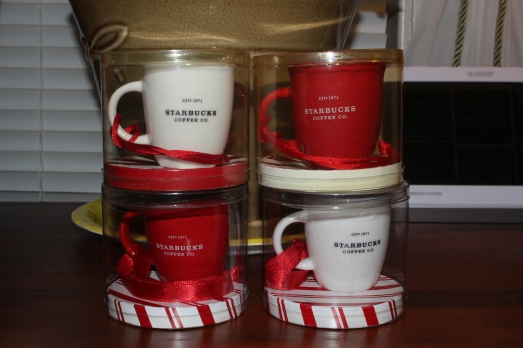 Starbucks did the first set of ornaments in 2003. But they gave us 2 great set’s to choose from. Set 1 includes the following cities:

The mugs are all stamped on the bottom 2002, but they were released as a set for 2003 as the original tag show’s.

This series is hard to find I’ll give it that

This is the second set of 4 that Starbucks released from the Skyline City Series.

These mugs are all stamped on the bottom 2002, but they were released as a set for 2003 as the original tag show’s on this one too.

These 2 City set’s were the one’s I was referring to in the 2002 Chicago City Mug Ornament. Since both set’s were sold in 2003, and all mugs stamped 2002, makes me think these also might have also been sold individually. I’m still keeping an eye out and if I do find any clue’s I’ll be sure to post them.

This concludes all of 2003’s ornament’s. I hope this helped solve anyone’s confusion on how these were sold.